In the past ILWIS had limited 3D capabilities. One could make a GeoRef3D which generated a 3D image (with a DTM) but it was cumbersome to use and quite slow. One of the goals of the 3.8 was upgrading these capabilities to something usefull.

In line with the design goals as mentioned in a previous blog, the idea was to create a 3D enviroment that could be helpfull for visual analysis. When one looks at a rendering of a map (2D), basically you explore the relations between the spatial locations and one or more attributes that are related to that spatial location. The most used is of course some color representing the value of an attribute. There are several schemes to enhance this ( number of attributea) in 2D but they often become a bit confusing.
If we use 3D space we can visualize the relation between spatial (X, Y) and two attributes in a simple way. We simply map the Z dimension onto a numerical attribute and still use different color ( or other form of representation) for the other attribute. This was for me the corner stone when designing 3D. So for example, the picture below shows the NDVI for a certain period (color) and the average precipitation (Z dimension) of the same period for the southern half of Africa.

So, how do we do those things? If you look at the Layer view at the left, you may notice two things that are different from the regular situation. First of all, in “global tools”, the 3D mark is checked. If checked the whole view shifts to 3D mode. But as the view has no default Z information, its just a flat map viewed in 3D. To add the Z information we activate the 3D properties tool ( context menu, right mouse button, on “Display tools”). Now we have a new tool in the tree, 3D Properties. To add a “real” Z value, double click on “Data Source”.  We get now a small form with a few options

Double clicking on the “Scaling” node will open the scaling form with which you can change the scaling and offset of the Z information.
Moving through 3D space happens with the mouse buttons and mouse wheel while the ctrl key is pressed.  With the left button you rotate around the map, the mouse wheeel changes the distance to the map and the right button changes the point which you are looking at. It is possible that this movement model will change slightly as I am not 100% satisfied with it.
These are the basics of 3D in ILWIS 3.8. One can also combine 3D in several layers. The picture below comes from a combination of a DTM layer and precipitation layer. 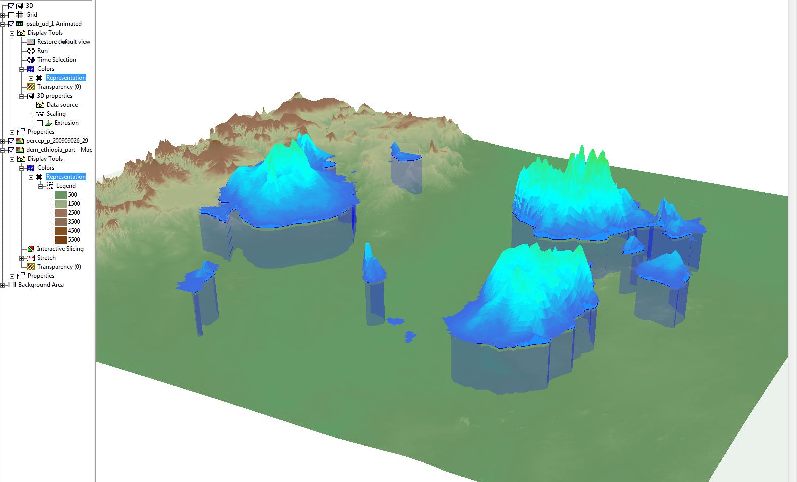 Actually it comes from an animation where rain clouds move over a portion of Ethiopia.
Three D has some limitations with respect to memory. At the moment the size of the rastermaps poses limitations. Beyond a certain size you might get out-of-memory errors and the visualization will not work.
3D isnt limited to raster maps, also vector maps can be used in 3D. Usualy, the Z information comes then from a attribute table but the other datasources are also possible. Below as picture of 2 segment layers that use the Z information of a DTM for the Z information. The contour maps also has extrusion on to better visualize its position in 3D space. 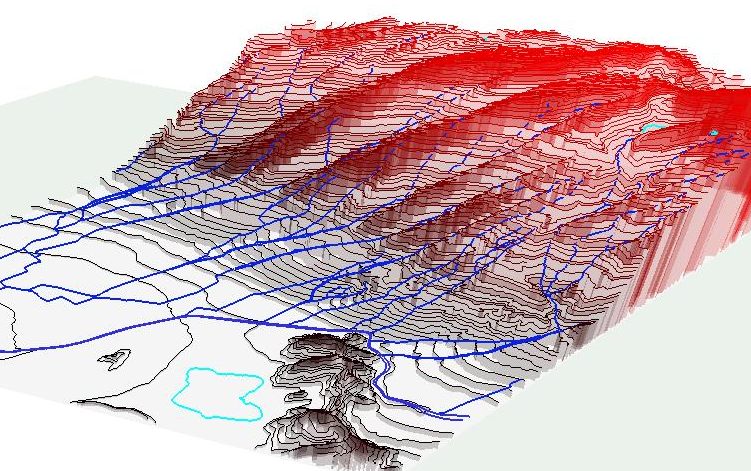 3D will be further developed in ILWIS with new tools ( e.g. space-time cube) but that is for after 3.8.