Monday and Tuesday, Arne attended the ESONET workhop in Marseille. Together with Dan Toma, Joaquin del Rio (both from SARTI) and Tom O’Reilly (from MBARI), we gave a demo to show the interplay of the PUCK protocol and our Sensor Interface Descriptors (SID) to establish a plug and play of sensors.

PUCK can be considered as an extension to a sensor’s firmware by adding some basic commands to the sensor protocol to allow the retrieval of the PUCK payload which contains the description of the sensor. In our case, this description is the SID of the sensor. Tom, the editor of the PUCK specification, has handed in the PUCK specification to OGC’s standardization process and we can expect to have an official PUCK standard by mid of 2011. Dan and Joaquin developed software, which runs on the PC connected to the sensor, to automatically discover a PUCK enabled sensor as soon as it is plugged in to the PC. This is done by scanning the serial ports of the PC. Then, the software is capable of extracting the sensor description out of the PUCK payload.
At that point, our SID interpreter is triggered by handing over the extracted sensor description, the SID, and starting the process of translating between sensor protocol and SWE protocol (i.e. O&M is inserted to an SOS via InsertObservation calls).

At the ESONET General Assembly meeting, we demonstrated this complete process of sensor plug & play with two marine sensors (see picture below): a WETlabs Triplet measuring fluorescence (can be used e.g. to detect oil in the water), and a Seabird CTD measuring conductivity, salinity and temperature. For both sensors the demo went well and we received positive response from the audience, people who actually have to manage observatories utilizing those kinds of sensors. 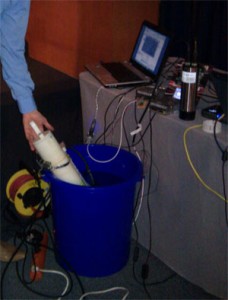 Another very interesting talk, was the presentation of Eric Delory who showed a neat browser-based client for the detailed description of sensor metadata (ranging from serial number to calibration history). This metadata can be provided through a simple Web form and is serialized in SensorML. By looking at our SID creator wizard, it would be perfect to combine these two clients to have both, the detailed metadata description as well as the detailed interface description, in one application. Let’s see if we can work on this together…