As people may have noticed who looked at the beta-1 of ILWIS 3.8, the way the user interacts with the layers displayed in the Map window is significantly different from previous versions. Basically the windows menu has been deprecated in favor of the layer view on the left side of the window. Almost all actions that changed the content of the rendering area are done through the layer view.

The reasoning behind this is a bit similar to why Microsoft invented the Ribbons. Menu items are to short lived. Menu items appear and disappear with the opening and closing of the menu. Even tasks that you do often need multiple clicks. Furthermore it is sometimes difficult to keep an overview where the different choices are “hidden”.

Ribbons (basically expanded button bars), are an attempt to solve this, but I don’t like Ribbons. All the choices of the “old” menus suddenly stare me in the face, 80% of which I don’t need at the moment. The layer view is a middle ground between the “stare in your face” method of the Ribbons and the “Hide all” method of the old menus. Basically you can expand to the property you want to control (e.g. transparency) and keep that available while the rest of the properties are in a collapsed state. 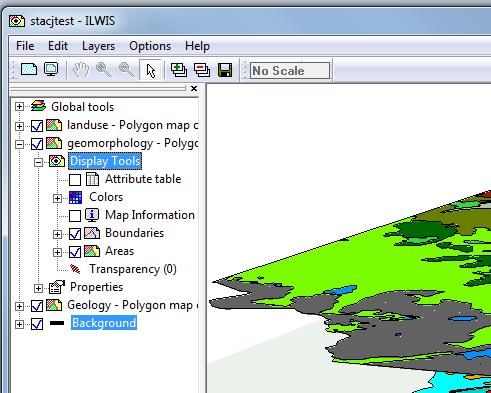 There are two additional things to know. First of all, each layer has an item display tools. All tools, tools are “things” that alter the properties of the display, are grouped underneath here. The display tools item has a right mouse menu with which you can show/hide the tools for this layer. Not all tools are visible by default 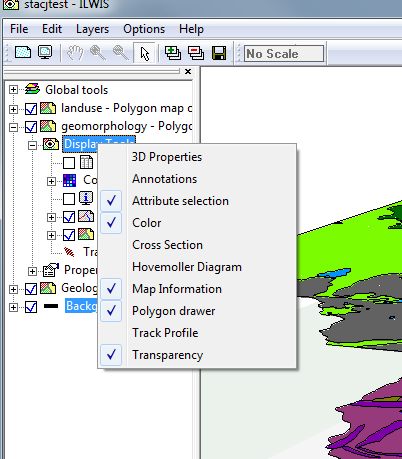 Second. On many tools you can double-click. This usually opens a small form with which you can change the properties of that tool. For example when you double click on a transparency tool you get a form with a slider to dynamically change the transparency of that item which the tool controls. 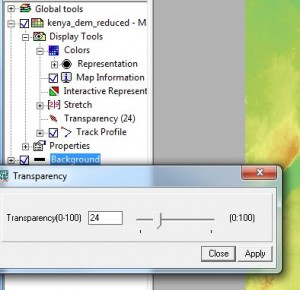 I still have to make an indicator if an item is “double-clickable” or not.

In the Layer view there are two special “nodes”. Global tools and Background. As the name sugests, global tools are tools that influence the view of all layers in the map window. Background controls the special “background layer” (coloring, transparency). Though mostely you won’t thouch this, it is possible as it is just another layer in the view.

All the tools are plug-ins. This enables programmers to create new tools without having to alter ILWIS itself. For example, last week I created a tool to display Hovmoller diagrams of tracks on the map without touching the rest of ILWIS.