One of the specific purposes of 3.8 was the improvement of the animations in ILWIS. These days there is so much spatial temportal data available and the amount of research directed at that is staggering. There are many ways to study spatial temporal data but one of the important ones is by animations.

ILWIS had a fairly primitive animations facility but that was not sufficient for the level of visual analysis I deemed necessary for ILWIS 3.8. Fortunately, here the ITC, there was some years ago, in the context of the reasearch work of C. Block (http://www.itc.nl/personal/blok/), a prototype made by W. Nieuwenhuis of a tool called ANIMVIS. It displayed a lot of the properties I felt were necessary for an animation tool for visual analysis. I used these ideas as a basis for the work on animations.
So what were my goals? Well

All these points are incorperated in ILWIS 3.8.
So how can we create an animation? The easiest way is to open for example a maplist and click the movie icon in the top button bar ( its tooltip says, “open as slide show”. Have to change this to “Open as animation”). The maplist is then added to the Layer view with its own special icon indicating that it is an animation.
If you inspect the tools available for this layer you will notice that they are much the same as for a normal layer. The difference is the “run” item and the ‘time selection item’.  Double clicking on the ‘run’ icon gives the form that controls much of the dynamic behavior of the animation 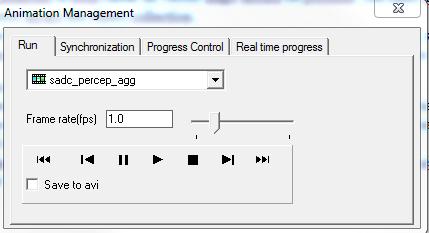 It contains multiple tabs of which the first one is the most important one. The form controls all animations in all map windows. The one which properties you are setting is the one that is active in the combobox. The rest of the first tab controls all the dynamics of the animation (speed, stop start, etc…). The checkbox on the bottom will ensure that the animation is saved to an avi file. The rest of the tabs are for synchornizing animations, selecting time information used for the animation (if available) and a more dynamic progress control ( point an click, move on the graph).
The small clip below illustrates the animation behavior ( monthly percepitation for the southern half of Africa). I used 3D in this case to Illustrate that properties for a singel layer also work for the animation.
http://www.youtube.com/watch?v=Kl9f5yTsp0A
Though animations work just fine in 3D caution has to be taken as not to use too large raster maps for this. The memory in your computer is limited and as much is precalculated in your animation this might grow outside the limits.
As a second illustration
http://www.youtube.com/watch?v=qUkW3e6SqOw
This is an example of a polygon map being animated. In this case, the daily percipitation over a part of Ethiopia. Nice in this example is to see how the background raster ( DTM) is autmatically morphed to fit the coordinate system of the animation (which is the leading layer in this example).
You can have multiple animations in one mapwindow, after all they are just layers. As to be expected, animating big, complex data sets ( vector particulary) is eating a lot of performance of your computer. Technically the animations work with “unlimited” size of datasets. In practice (but this depends on the computer) beyond 3000-4000 ilwis polygons, performance degrades.