The second Beta of ILWIS 3.8 is done and on the download site!

So what can you expect of this Beta? Well, a number of things that were not available in the first beta are now available, such as color composite and some editors. Some new things, things that were not possible in 3.7 have been included. For example Hovmoller diagrams and base maps (see below).

A few of the new things are:

Often it is convenient to have some data-sets always available; for example a boundary map of a certain region to make orientation easier. To facilitate this the “basemaps” have been introduced. Basically it is the same as “system” objects for ILWIS but this time for maps. They reside in the basemaps folder of the system folder of ILWIS. Any map in there will show up as base map when you want to add new layers. The add layers form has been adjusted to reflect this and in the Catalog there is a new menu entry under the “Show data” item (also in the context menu of the catalog). By default I have included three data sets to illustrate how this option works.

Dynamic color composites were not possible in 3.8 beta 1. The editor for this has been fully rewritten and is now included in the 3.8 beta-2. It follows the same ideas as the other display tools. Double clicking on the nodes of the tree brings forth forms to change the properties of the tool (in this case stretch on the values and order of the bands). We didnt include HSI color composites yet as we were a bit unsure if this option was used often but we can include it. 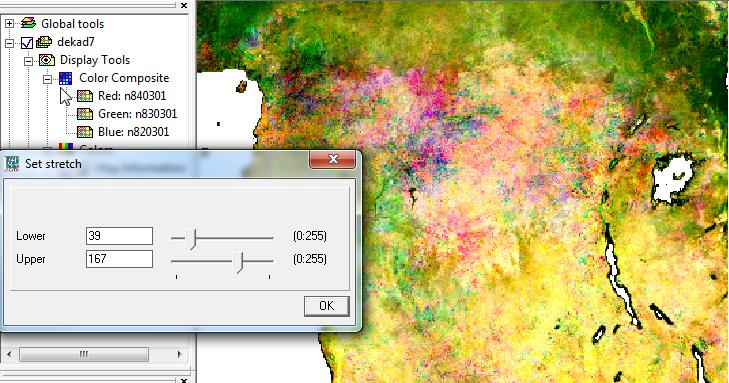 The content of the map window can now be shown in fullscreen mode. So no Layer tree view, no menu, only the map. There still a little bug(they are visible) with two scrollbars but that will be removed.

A Hovmöller diagram is a commonly used way of plotting meteorological data to highlight the role of regular occuring events (“waves”). They are not limited to meteorological events though. In ILWIS the content of a maplist (over a longer period) is plotted on a tracking line on the map leading to diagrams like this: 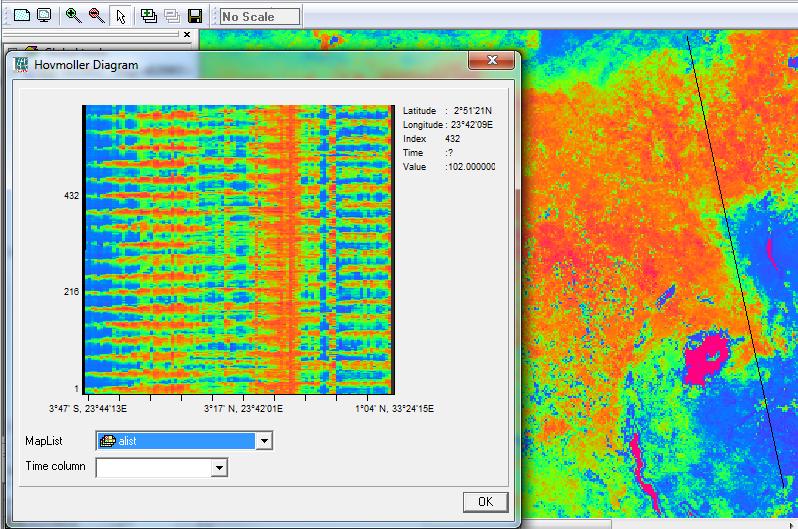 Of course a number of bugs have been removed and the UI has been cleaned up at a number of places. I think this will be the last beta. The next version will be the release version.