Though ILWIS was in theory multilingual from the 2.0 version, it was hardly used. I believe there was a (partly?) Italian version and a partly Spanish version, but they never ended up in the release version and/or were maintained. In the 3.7 this for the first time changed. Thanks to the work of Robin Prest and the money from the Geonetcast project a french translation of the user interface could be made.

The work of Mr .Prest made me also realize that the existing translation system was cumbersome and difficult to maintain. Oh, it worked, the results are ok. But it is more work than needed and difficult to track changes. Furthermore I found is as a programmer also quite annoying. Basically I had to touch multiple files when adding a string in the code. So one of the goals for the 3.8 was a more comprehensive translation system.

From the GeontetCast project the clear whish was there to have a Spanish and Portugese translation. So it was reasonable to spend some time to make this easier

I had a few goals with the new translation system,

Fortunately I had come across the Qt platform. For some time I am pondering how to move the Ilwis code base from Windows/MFC to something more modern and platform independent ( enough stuff there for another blog) and in this context I came along the Qt framework. Apart from other nice things they had a suitable translation system in place that I adopted with some modifications for Ilwis.
What basically happens it that every “translateable’ expression in the code is compared to a lookup table that is loaded at startup time of ILWIS. If there is a translation, it will choose the translation. If not it will use the original English phrase. Internally, Ilwis only uses English. The advantage of this system is that I can extend Ilwis without needing to update the translation files each time. Incomplete translation files will simply lead to more non-translated English in the UI. Not ideal, but much better than having nothing at all. Once in a while you update the actual translation files and then everything is cool again.
So how does translating ILWIS works? It is very simple.The language files exist inside a folder in the instalation folder of ILWIS : Resources\Strings. At the moment you will see there a number files with the extension .fr and .sp. French and Spanish translations ( I am not 100% sure if the spanish is already there in the beta-2, it is now). For each language there are three files (I take french as an example). Men.fr, Dsc.fr and string_table.fr. From a technical point ‘Men’ and “Dsc’ could probably be merged but I’ll leave it as they are not that big anyway.
That is all there is need for translating ILWIS to a ‘local’ language. Ilwis translations have their limitations. When the internals of ILWIS were designed, many years ago, Unicode was in its infancy. It was not considered and still isnt part of Ilwis. So translations are limited to alphabets that uses the extended Ascii table. An annoying limitation these days but it is very difficult to change that (probably for a rewrite of Ilwis).
Ok, nice that we can translate things. But how do we activate a translation? Well, Ilwis contains a form that most people don’t seem to be aware of , the preferences form (under the file menu). In that form you have the ‘General’ page in the tree. That looks like this 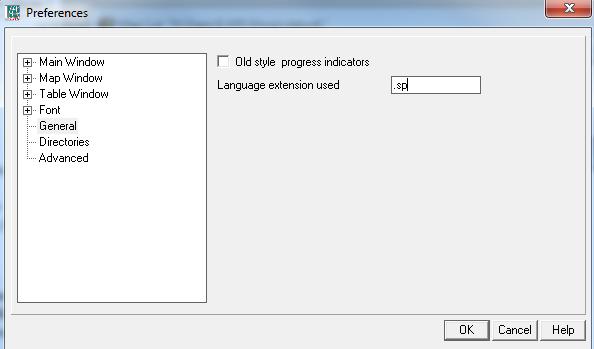 In the form you can indicate which language files should be used (based on extension). In this example I have choosen Spanish (.sp). When I press Ok and restart ILWIS it will use the spanish translation. So a contour interpolation form suddenly looks like 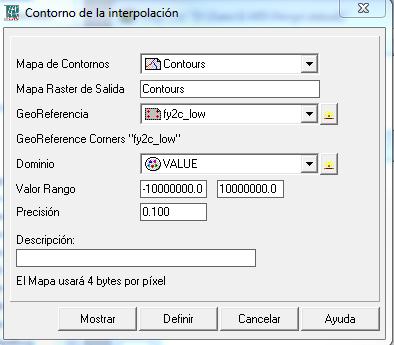 A spanish form :).
Ilwis 3.8 will contain a french and a spanish translation. It is likely that there will also be a portugese translation but that remains to be seen.
One thing. The translation is about the user-inteface of Ilwis, not of the help files. That is far too much work to do for volunteers.