Last week I spent some time spend some time finishing and polishing the (programming) work 0f an MSc student (Rani Charisma Dewi), who did some work with Ilwis in the context of her MSc. With my assistance, she filled in a gap in the animations that had been there since about the time of the creation of the new animation system.

In the Animation management form there had always been a somewhat mysterious tab called “progress control”. In it you could see a graph and a marker going at the speed of the animation over graph that was basically a straight line. There was a combobox called “reference attribute” but what it all meant was rather unclear. It was unclear because it was unfinished. I had some ideas about it but never found the time to act on those ideas. Fortunately Ms Dewi came along and with her help the unfinished part became finished.

The idea behind this tab was to create a system to enable a user to visualize when during an animation the (numerical) values in a map exceed a certain meaning full number. During an animation the image is constantly changing and it is sometimes difficult to track the values on the map to see exactly what is happening. To use this system a user has to create an attribute table attached to the maplist that contains a column with marker values. To assist you in this there has been created an application “TableMapListAttributeFrom” that creates a table with statistical marker values for each index in the maplist (e.g. average, median etc..). But you may also create a column by any other means with significant values. 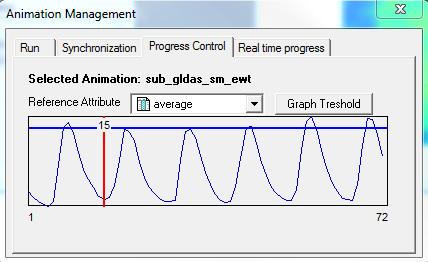 A graph that shows the average of 72 maps and a time marker moving over those maps. Furthermore there is a blue threshold marker (see below) that gives an indication were the average of a map passes the treshold. ‘Fine’ you may think, maybe slightly useful but not overly so. Things get more interesting when you also look what is happening in the animation. 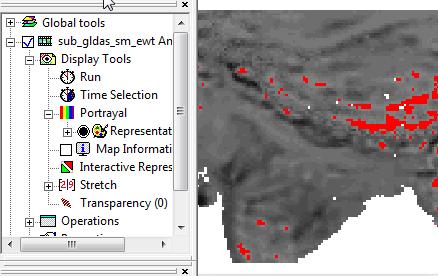 On the map red pixels have appeared. These are pixels where the pixel value has exceeded the treshold. During the animations you constantely see the areas change and it is easier to track changes this way. The properties of the treshold can be set by the pressing the button. You then get small form with some properties.

The tool becomes realy interesting to use when running two synchronized animations with threshold values, making the top animation partly transparent. It is then easy to track if changes in one dataset have possibly some relation to changes in another one.

Note, that you have related functionality through the “interactive representation” but here there is a clear link with statistical significant markers values.