Well, the 3.8 is finally finished. Really? Yeah, think so. The perfect software doesn’t exist. There is always room for improvement, there are always new ideas. But at a certain moment you have to draw a line. The question then becomes “is it good enough?”. In January I decided that, apart from some known missing things, I would wrap things up in April. The beginning of April I looked things over and, apart from the WMS client, all things were done and seemed to be in working order (WMS client was done in time). Sure some issues are still there, some inconsistencies in the UI, but as far as I could see nothing serious. Perfect software takes forever so I decided to release.

So, are we done? Of course not. Undoubtedly there will be a 3.8.1 (no, I don’t say when) and a 3.8.2 is also likely. Maintenance is always needed. There are a few things I have on the menu (in random order)

So enough to do.

And then there is of course Ilwis NG. The next version of Ilwis. This will probably occupy more and more of my time in the rest of the year. A proposal for a general architecture has been created 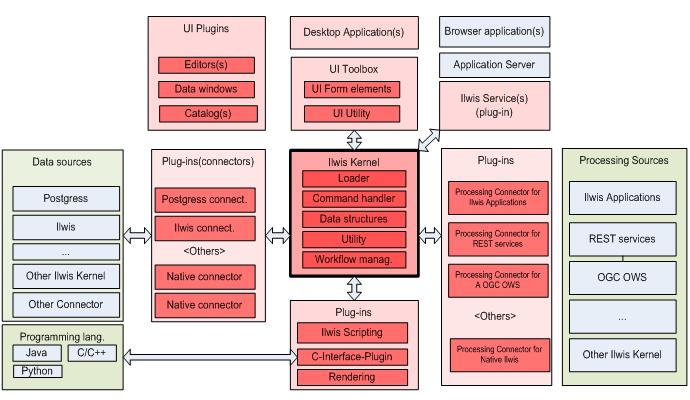 These are the picture programmers like to stare at, forgetting all the work that is involved. Most people couldn’t care less about all the squares and arrows, but I thought it might be useful to show that Ilwis NG is no pipe dream. For me the goal is to create an Ilwis version that can function as a kind of connection point between hetrogeneous data sources and diverse processing services while facilitating a good UI – Ilwis as a kind of integrator that delivers a consistent and good UI, be it desktop or browser (something that is sorely lacking in many open source software projects). I also want to create a source base that is much more open for outside developers and much more modular.

In a pilot, I already created a base version of Loader and part of de core data structures for Ilwis NG. This doesn’t do much (apart from loading data) but it is a proof of concept that the ideas that are represented in the diagram are workable. It would be nice to have more developers on board as this would speed up the work and improve the design process.