As mentioned in my previous blog post, this project aims to add some new features to the enviroCar Android application. The app already contains features which display a car’s CO2 emission and speed. So in the first phase of my summer of code, I focused on modifying the existing dashboard and localization.

The following screenshot displays the dashboard of the original app.

From now on, when a user selects a gasoline car, fuel consumption, CO2 emission and engine load will be visible on the dashboard. For diesel cars, speed is displayed instead of fuel consumption.

Fuel consumption, CO2 emission and engine load are three important units that are relevant to the user, although the app calculates several other data values such as MAF or intake temperature (the details are in this API). The screenshot below shows the dashboard for a gasoline car.

This dashboard actually consists of some customized views like this and this. I have made separate views for diesel and gasoline cars, and substituted it on the dashboard when the respective option is selected (replace View here) 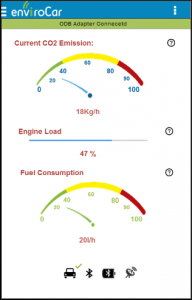 The user is also given general information about the parameters that are displayed on the dashboard. Currently, the text is temporary and the most relevant information will be decided. It will also change according to the units and language selected.

Work has been done to consolidate the information provided and make the app more user-friendly.

The application detects the locale and automatically changes its language accordingly. For different languages, there are different default units. We allow users to select a different set of units so that the userthey can choose the units he they areis most comfortable with in his languagewith.  Different units are provided in an XML file and their values are parsed in Java. Thus the model is extensible and can accommodate a large number of  units. Here is some code regarding this.

Those were the targets for the mid-term. Now a big upcoming part is the “MyProfile” section in the app. On the enviroCar website a user can compare statistics with other groups or users after the user logs-in.  As shown in my mockups, this section will cover displaying to a user

Afterward I will work on introducing some contrasting designs in the settings (user’s choice). Currently the app has major portions in white, which drain the battery. So we are aiming at a high contrasting background . In the last leg of GSoC, I will also work on some high priority bugs.