With only a few days left, the enviroCar SPARQL endpoint comes closer than ever to becoming reality. Much work and research has been put into an immensely important segment of the 52°North  enviroCar project – the data. This project involves all kinds of data from standard relational to semi-structured to geo-spatial, which makes it both versatile and extendible. In a nutshell, we extract enviroCar’s data from its database form, convert it to the Linked Data format, store it in a triple store and serve it to the world as an Endpoint. Have a look at how different data looks when represented in different formats!

What a user named “Tester” looks like from a sample enviroCar database. 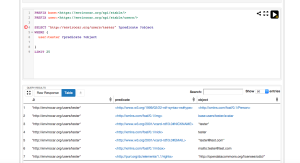 What the same user looks like in Linked Data !

Key Uses and Importance of this Project

This project is massively important and comes with numerous uses and benefits. It is important to understand why one needs to convert the data into another form and see it as LOD .

The Journey so far

When we started out, my summer of code Mentor and I discussed the project and planned three phases.

During the thirteen weeks, the following three phases actually happened.

Hence the path deviated from the original one a fair bit. The goals were adjusted in a SCRUM style. Throughout the journey we have gained immense knowledge about architecting such a system, what are the challenges for a particular outcome and which advantages and disadvantages do the existing packages have.

Thinking about a system for a long time gave me the opportunity to gain insights on the system we are trying to build and how it would develop in the future. Also it will help users to build new exciting features and applications around the project

Features like in built configurations for SPARQL servers , option to switch between on the fly updates and RDF dumps and full fledged automatic data linking are features that come up first and not far away from implementation

It’s been a long thirteen weeks with amazing learning and knowledge gained. I have to give credit to my Mentor Mr.Carsten Kessler for being a fantastic mentor and helping me out in the world of Linked Data and Spatial Semantics. Also, I would like to thank Daniel for his well planned use of Trello and constantly watching over and helping out throughout the course of the summer. There are some very talented people at  52°North and fantastic projects. I am glad I found this community. It’s come to an end all to soon and I have learned many lessons. A heartfelt thanks to all!

The key resources for the project: