In a previous Blog-post, we implemented an application to identify water surfaces using Synthetic Aperture Radar (SAR) images produced by radar-based sensors. The main advantage of using this type of sensor is that it can overcome the limitation of optical spectral sensors in the case of clouds and weather conditions that block spectral reflectance. An example is the Sentinel 1 satellite, which uses microwaves that can penetrate haze, light rain and clouds to illuminate the earth and measure the backscatter and travel time of the transmitted waves reflected by objects on the ground. It has the clear advantage of being far less dependent on the weather and can acquire images at night to obtain near-real-time information and monitor the earth over a large area. Furthermore, SAR images provide a lower backscatter reflectance for water surfaces as compared to non-water surfaces. This significant difference can be used to distinguish water surfaces and other land areas.

SAR images are freely available through the Sentinel Scientific Data Hub. We used the Ground Range Detected (GRD) product, which consists of the polarized bands VV and VH. Subsequently, we applied a pre-processing pipeline to calibrate the images using the SNAP API‘s python library “snappy” to perform data pre-processing for the SAR data.

Flood mapping and flood detection is a very important application that uses the properties of SAR images. It helps response agencies by providing near-real-time information on areas affected by flooding. It can also be used to develop a framework for potential damage assessment by analyzing pre-flood and post-flood maps. 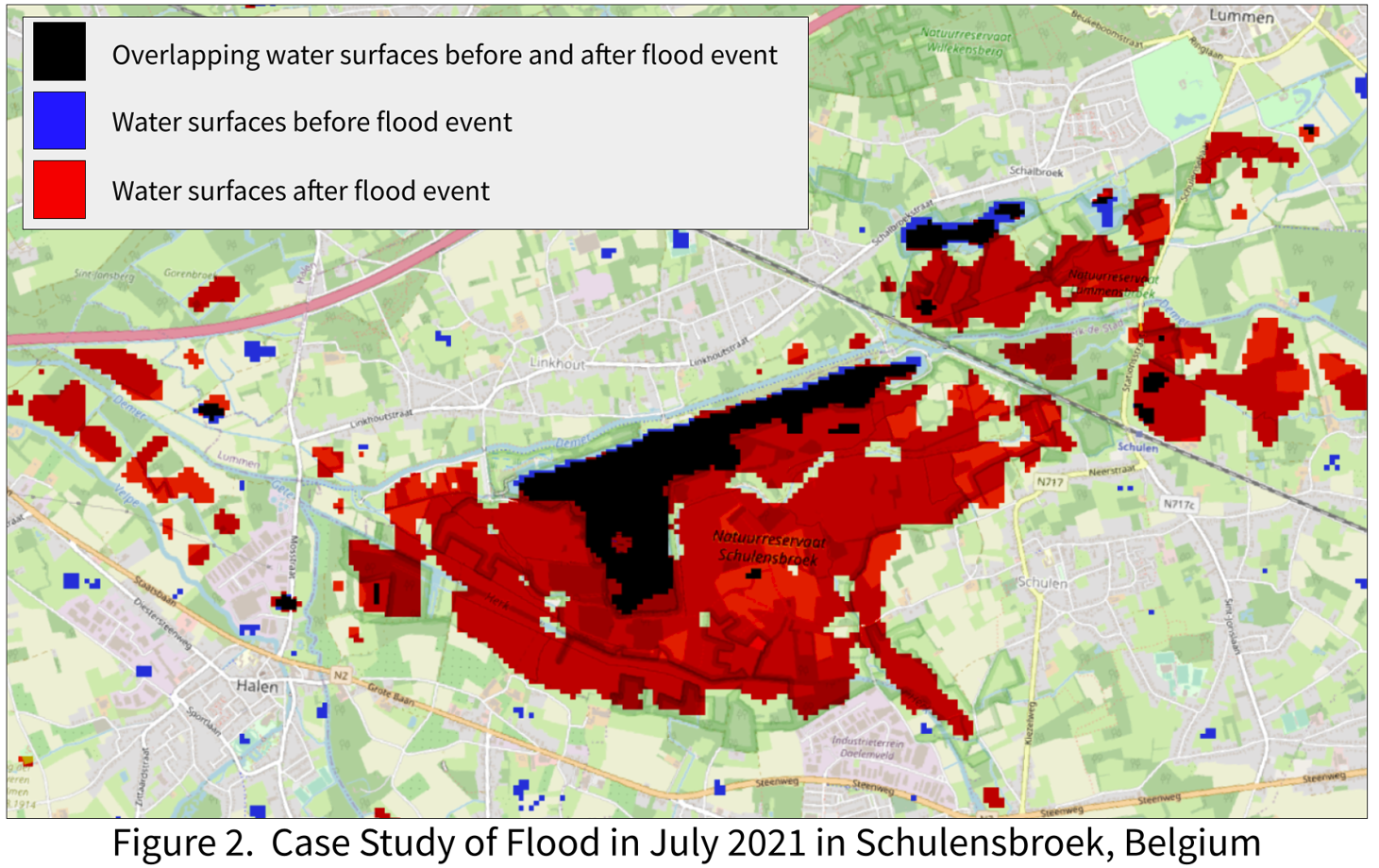 We experimented using our flood analysis workflow. This consists of classifying pre-flood and post-flood water surfaces in order to extract affected areas. In Fig. 1, we evaluated a flood analysis in west Europe on July 18, 2021. As the analysis suggests, areas such as Roermond, Grevenbricht in NL and Schulensbroek, Belgium were severely affected. Some cities had to be evacuated. Fig. 2 shows the affected nature reserve of Schulensbroek after the heavy rainfall, where more than 100 liters of water fell per m² in just a few days.