Some of the improvments are:

There are further improvements planned which will be integrated in the next releases.

The implementation of the 52°North SOS has been performed in the context of the OWS-9 CITE compliancy testing, and the European projects EO2HEAVEN and GEOWOW. It has been developed in parallel to the CTL (compliance test language) scripts of the SOS 2.0 conformance classes used by the OGC TEAM (Test, Evaluation, And Measurement) engine.
A downloadable zip archive of the release is available in the download area of the 52°North homepage. This zip archive contains the sources as well as the binaries. The requirements for the release and some information how to install and configure the 52°North SOS 4.0.0 Beta1 are documented in the 52°North wiki.

On our demonstation web server you can find an instance of the 52°North SOS 4.0.0 Beta1 release. 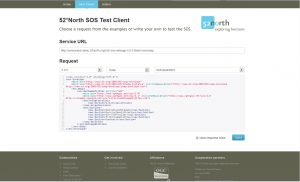 The new test client provides some example requests which can be selected and executed.