Currently, the Android application for enviroCar can record tracks only when it is connected to the OBD-II adapter through Bluetooth. The enviroCar app will be of no use to the user, if he/she does not have a working OBD-II adapter or if Bluetooth is not working on the user’s mobile phone. This limits the usage of the app to a great extent. The main goal of this project is to add plain GPS-based recording of a track to the enviroCar Android application. This will increase the usability of the enviroCar app and simultaneously increase the collection of data on the enviroCar server. It is also equally important to automate the GPS-based track, for which Activity Recognition features can be used.

The main project repository can be found here: https://github.com/enviroCar/enviroCar-app

Plain GPS-based track recording is implemented in the application. It is equally important to implement a procedure to automatically start/stop the GPS based tracks. This improves the user-friendliness of the application. The best option available to automate GPS-based tracks is to use Activity Recognition features. After a study on available Activity Recognition libraries, we decided that Google’s new Activity Transition API is the most suitable one for our use case. This API provides updates whenever it detects any change in the user’s activity, which is what we needed. So we decide to test the reliability, latency, and efficiency of the Activity Transition API to determine whether or not to use the library in the application.

Previously, GPS-based tracks could be started whenever GPS was turned ON. However, there was no verification that the track was running while the user wass driving. This could generate many unnecessary tracks. So adding a verification for starting GPS-based tracks is necessary. I found that the best way of adding the verification is to use Activity Recognition features. So Activity Transition API is used here to verify that track is started only when the user is IN_VEHICLE. In the same way, GPS-based tracks will be automatically stopped when we find that the user has stopped driving. Track data collected while a user isn’t driving is of no use.

Apart from the technical stuff, new screenshots were designed for display in Google Play Store which can be accessed here. Some of them were as follows : 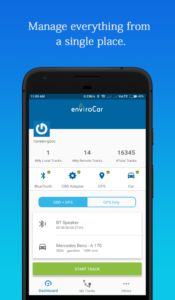 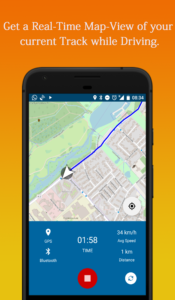 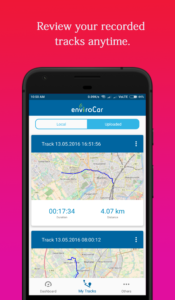 It was a thirteen weeks journey of learning new things and having new experiences. I would like to thank my mentors Arne de Wall and Christoph Stasch for their valuable time with me. Especially, I want to thank Arne de Wall for his constant support and guidance. I really enjoyed working under his guidance. Coming to the project, I think I have completed all the goals set by me in the initial proposal. I hope that my contributions make some difference in the evolution of the enviroCar project.