So what can we expect for let’s say the next month of ILWIS. It’s nice that the 3.8 has been released but that doesn’t mean that the work has suddenly stopped. I have been rather busy the last few weeks with a few developments that I would like to share with you.

END_OF_DOCUMENT_TOKEN_TO_BE_REPLACED

Well, the 3.8 is finally finished. Really? Yeah, think so. The perfect software doesn’t exist. There is always room for improvement, there are always new ideas. But at a certain moment you have to draw a line. The question then becomes “is it good enough?”. In January I decided that, apart from some known missing things, I would wrap things up in April. The beginning of April I looked things over and, apart from the WMS client, all things were done and seemed to be in working order (WMS client was done in time). Sure some issues are still there, some inconsistencies in the UI, but as far as I could see nothing serious. Perfect software takes forever so I decided to release.

END_OF_DOCUMENT_TOKEN_TO_BE_REPLACED

In the screenshot (click to enlarge!) below you can see the ILWIS MapMovingSurface interpolation algorithm in ArcMap: 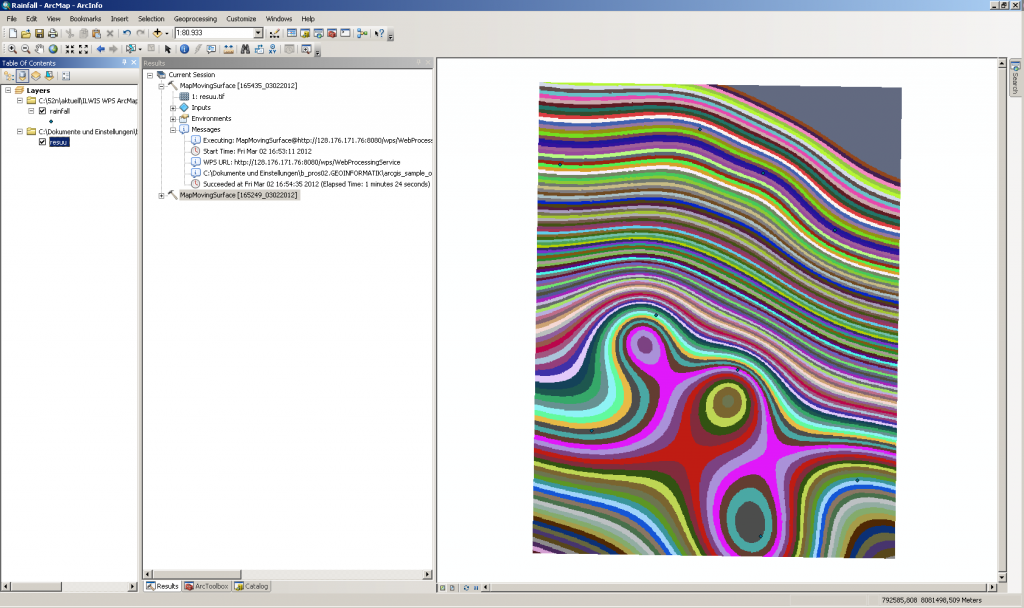 My first few blogs will be about the upcomming 3.8 of which I published a first beta just before my holidays. The next beta will follow shortly.

The last few years, as a programmer, I encountered serious limitations in what ILWIS could render on the screen. The rendering system was designed when computers had far less memomry, puny (compared to now) graphic processors and the data-sets were much smaller. With large, multi-spectral and spatial – temporal data-sets, with big feature sets, web technology etc.., the existing system ran into serious limitations.