This project aims to develop methods and classes specifically designed for trajectory analysis. Over the past five weeks, I have made progress in three main aspects.

First, I have been learning the basics of developing packages for R and making a transition from an R user (a.k.a. a useR) to an R developer. Second, I wrote a function for converting raw trajectory files into STI objects and eventually into STTDF objects. Third, I wrote an additional function to enable a simple spatial overlay operation between one or more STTDF object(s) and a SpatialPolygons object (from sp package), both at the individual point level, as well as at the trajectory level. 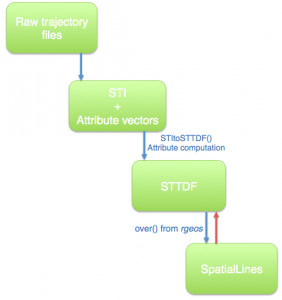 More specifically, the function named STItoSTTDF creates an STTDF object from STI objects and attribute vectors (see the top three boxes in the diagram). In this process, it is assumed that each STI object contains a single trip (or burst) and the attributes of the points in each trip, such as altitude, user ID, and trip ID, are stored in attribute vectors. In addition, five more attributes will be calculated:

All five attributes, along with the original attributes from the trajectory file (e.g., altitude), are stored in the data frame slot of the STTDF object.

More information about this project can be found at https://r-forge.r-project.org/R/?group_id=1550